Menu
X
Subscription options for our in-house journals would be Print only and Print + Online in view of the recent pandemic which has made e-journals more convenient and accessible to readers. 2020 Stock available for all ADR Medical, Nursing, Engineering, Pharmacy and Arts Journals. Please drop an email at subscription@adrpublications.in. 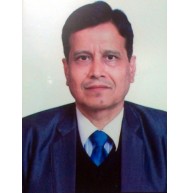 Dr. S.N.Sharma, former Joint Director of National Vector Borne Diseases Control Programme Delhi is an Eminent Public Health & Medical Entomologist and Vector Control Expert  in the field of Vector Borne Diseases. He has been nodal officer and focal point at National Level and  looked after National Programmes targeted for elimination i.e. Malaria, Lymphatic Filariasis, Kala-azar and also for other Vector Borne Diseases. After his superannuation on 30th June 2017,  he has worked as Consultant in GFATM Project of NVBDCP from 1.7.2017 to 31st December 2018. Presently, he is re-employed and working as Sr. Consultant  at  National Centre for Disease Control, Delhi w.e.f.1.1.2019.

He possesses more than 37 years of long experience in the field of public health & medical entomology and vector control. He has guided 9 Ph.D. students, 4 DPH and 3 MPH students and has published more than 100 research publications in National and International journals of repute. He has technically contributed to several documents on Strategic Action Plan for Malaria Elimination, Integrated Vector Management and guidelines  Indoor residual spray, use of larvivorous fishes , urban malaria scheme, insecticide resistance and medical entomology. He has been the member of most of the common review missions to the states organized by National Health Mission. He has also been the member of Independent Appraisals and joint monitoring missions held  for Malaria, Kala-azar and Lymphatic Filariasis.

He is the member of Vector Control Working Group (VCWG)  Roll Back Malaria, Geneva, Expert Member of Technical Committee of NVBDCP, Govt. of India on the use of Insecticides. He is also member of Expert Group on Insecticides constituted by Govt. of India by NVBDCP.  He is presently, General Secretary of ISMOCD and the Managing Editor of Journal of Communicable Diseases. Recently, he has developed a training module on Ticks, Mites and Flea Borne Diseases and Guidelines for Vector Surveillance at International airports and ports to used by public health professionals and medical entomologists..

The Ministry of Agriculture, NIRDPR invited him as an validation expert to validate the course curriculum for Local Bodies technicians and to develop training modules under Structural Pest Management project. He has contributed two chapters in the book, “ Extension Strategies for Pest and Vector Management in Human Habitations” developed by MANAGE, Ministry of Agriculture of India. He has visited across the world visiting most of the countries abroad i.e. USA, Germany, France, Switzerland, Thailand, Malaysia, Indonesia, Bali, Nepal, Bhutan, Bangladesh and Sri Lanka during his active service and had the opportunity to chair and co-chair in some of the technical meetings.